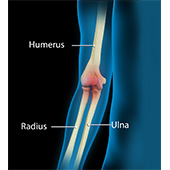 Damage to any of the structures that make up the elbow joint can cause elbow pain. 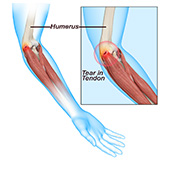 Tennis elbow is a common name for the elbow condition lateral epicondylitis. It is an overuse injury that causes inflammation and microtears of the tendons that attach to the lateral epicondyle. Tennis elbow is a painful condition occurring from repeated muscle contractions at the forearm. The condition is more common in sports activities such as tennis, painting, hammering, typing, gardening and playing musical instruments. 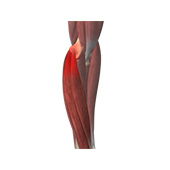 Golfer’s elbow, also called medial epicondylitis, is a painful condition occurring from repeated muscle contractions in the forearm that leads to inflammation and microtears in the tendons that attach to the medial epicondyle. Golfer’s elbow and tennis elbow are similar, except that golfer’s elbow occurs on the inside of the elbow and tennis elbow occurs on the outside of the elbow. Both conditions are a type of tendonitis - inflammation of the tendons. 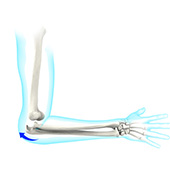 Elbow instability is a condition in which the elbow joint occasionally slides out of alignment due to the unstable state of the joint. 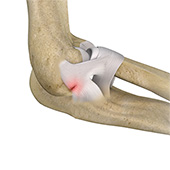 A ligament is a band of elastic, tough fibrous connective tissue around a joint. It attaches bone to bone, supports and holds them together and limits the joint's movement. Your elbow is made of four ligaments. The ligament on the outside of the elbow is a lateral ulnar collateral ligament (LUCL). It is the main one of the four ligaments that make up the lateral collateral complex of the elbow. 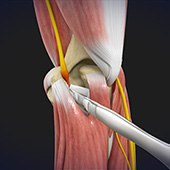